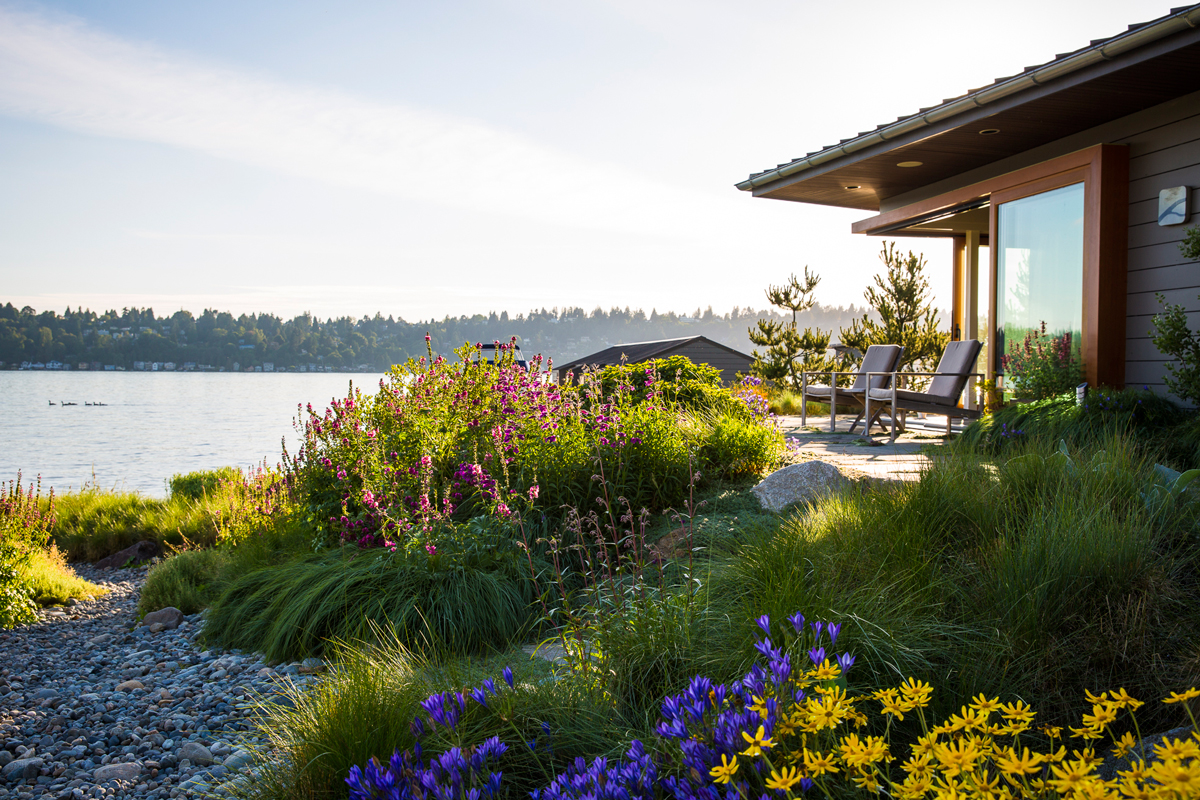 British born Paul R. Broadhurst of Broadhurst + Associates of Seattle may be an award-winning environmental scientist, shoreline restorationist, landscape designer and artist, but his sleuthing talents are akin to Agatha Christie and his artfully terraced garden design alive with color and natural elements for this lakeside home is reminiscent of famed British horticulturist, garden designer and artist Gertrude Jekyll.

At work on a neighboring Lake Washington garden in 2011, Broadhurst noticed the adjacent property had a failing bulkhead, spurred no doubt, by the sterile landscape with little more than weekly-mown grass with run-off probably going into the lake. The bulkhead design was also causing wave velocity to mount rather than dissipate and be forced back into the lake, where it scoured the bottom, discouraging plant and wildlife.

Homeowners Pamela and the late Al Bendich, who spent 2.5 years looking for a lakefront home with frontage sans severe drop off, purchased the neighboring property in 2006, knowing their grandchildren would enjoy frolicking on its expansive lawn. As the years passed, the only wildlife attracted to the property were Canadian geese, whose droppings were significantly lowering the lawn’s enjoyment. Thus, Pamela, who had always been the gardener in the family, began eyeing the neighbors’ landscape design.

“It was more natural and organic than the 155 ft. of our concrete bulkhead and landscape of lawn,” she says. “Al and I would peek over into the neighbors’ yard to scope it out and began talking to Paul.”

“The Benedichs had previously owned a condo overlooking Seattle’s Olympic Sculpture Garden, where they met and befriended a marine biologist who talked about the benefits of naturalizing the waterfront,” recalls Broadhurst. “As a result, they were interested in exploring a better way to bring more wildlife to their garden.”

Broadhurst and Pamela hit it off immediately, working hand-in-glove to create the landscape design, including a gradual slope down to a pebble beach armored with logs at the water’s edge. “The initial planning was a lot of fun,” says Pamela. “With a quarter acre of lawn, it was like having a clean slate to work with.”

The two enjoyed volleying plant ideas and colors back and forth. “I think of plants as architectural,” says Pamela, “and, like Paul, I like a lot of variation in color and plenty of perennials so there will always be something blooming throughout the year.”

Since Broadhurst had more knowledge of the native Pacific Northwest varieties that were required for the 10-15 feet along the shoreline, he proposed a kayak trip for the entire family to visitit Yellow Island Nature Conservancy. “When clients are about to embark on a landscape project this big and this costly,” he says, “I like to find as many ways as possible of firing their imagination. Since Yellow Island is covered in wildflowers not found on the mainland, I thought it would inspire them. Indeed, many of the flowers and bulbs ultimately chosen for their garden were first seen and appreciated during that trip.”

When Broadhurst suggested the Bendichs put a black infinity pool into the mix, the couple asked their grandchildren whether they wanted to keep the existing sports court or add a pool. “Their answer was a quick yes,” recalls Pamela.

The two-year-long project demanded patience, says Pamela, who Broadhurst describes as a “tour de force” during the planning and execution of his living shoreline landscape. Al, whose only participation in Pamela’s previous gardening endeavors had been to remove her clippings, soon became interested in the necessity for ecology and shoreline habitat and was talking the talk.

His patience, however, was put to the test when the reality of the process revealed itself. The only way to bring in the backhoes and cranes necessary to remove the bulkhead, create the landscape and place the boulders was by water on a barge. “We had three barges on the waterfront for months,” recalls Pamela. “It was a huge thing.”

It was quite a leap of faith for the clients, with whom Broadhurst formed a wonderful friendship, even traveling together to Alhambra, Spain, and touring such English gardens as Jekyll’s Munstead Wood and Christopher Lloyd’s Great Dixter.

“At one point,” recalls Broadhurst, “there was a huge mound of fill dirt needed to recontour the site and make it more natural, and Al asked, ‘Is that what we’re going to be looking at?’”

Broadhurst hand-picked and numbered the large boulders from a Cascade quarry that had to be craned in by barge. Pamela was in awe of the crane operator, Craig McIvan, who was able to deftly pick out the numbered boulders for behind the pool and along the waterfront from the large pile. “I’ve never seen anyone work a piece of machinery the way he did,” says Pamela. “He was an artist.”

Broadhurst’s passion for the project knew no bounds. While discussing adding a bench to the promontory and whether it should be crafted from wood or stone, he mentioned an Orcas Island woodcarver who could carve a bench from a downed tree there. When Pamela asked how he’d deliver such a bench, he replied, “We’ll have it shipped down by barge with other things and they’ll put it in place.” In fact, the carved bench became one of Al’s favorite spots from which to survey the lake and garden.

During two subsequent trips with the Bendich family to Yellow Island and the tour of Great Dixter in England, Broadhurst continued to fire the couple’s imagination by comparing tales of his first having seen the stunningly beautiful Camassia bulbs growing in natural grasses in the English countryside to finding them in the Pacific Northwest, where the indigenous people of North America once harvested the plant as a starch vegetable before discovering potatoes. “Al particularly liked this nerdy kind of stuff,” recalls Broadhurst fondly. A little bit of wild and wooliness in urban or suburban gardens can be messy, says Broadhurst, but also inviting to wildlife. “Shores aren’t attractive in January, but butterflies lay their eggs there, which brings birds to eat them, thus creating a blended habitat of birds, bees and butterflies.”

The Bendichs were so pleased with the transformation, they held a giant pool party for the crew members and their families. “Everyone had a role to play and exercised it with a great deal of care,” says Pamela. “They were very proud of the work they had done, and we were proud of it. So why not have a party?”

Upon its completion in 2012, Green Shores for Homes (GSH) of Puget Sound and British Columbia, an EPA-funded initiative, asked to make the garden a pilot project for promoting healthy soft shorelines. Today, Broadhurst holds semi-regular workshops for landscape planners with GSH.